In October 2009, we decided at the last moment to join a tour with Roy and Mario with For the Love of Port (http://www.fortheloveofport.com/).  While Charlie and I prefer to travel on our own or with our friends, the offer that Roy made to us was too good to pass up. As it turns out, this was a wonderful trip.  We met owners and winemakers, and drank copious amounts of Port and Portuguese table wine.  If you want to visit Portugal – and you should, you can’t go wrong with one of the For the Love of Port‘s trips.  Finally, of all the wine regions we have visited to date, I would say that the Douro is the most beautiful.  The Douro is a spectatuclar region to visit.

click/tap map (and any photo) to enlarge 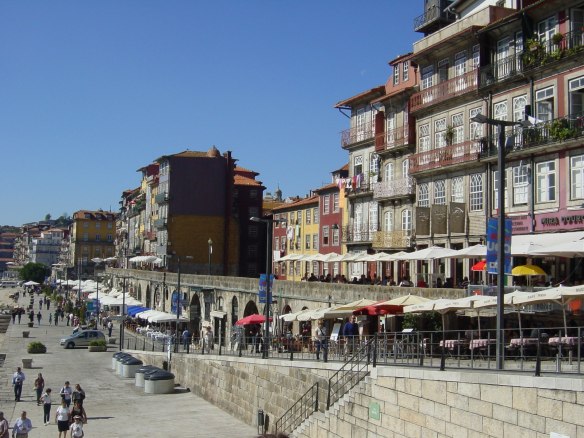 view of the Ribera quarter in Porto

on the riverfront of Porto 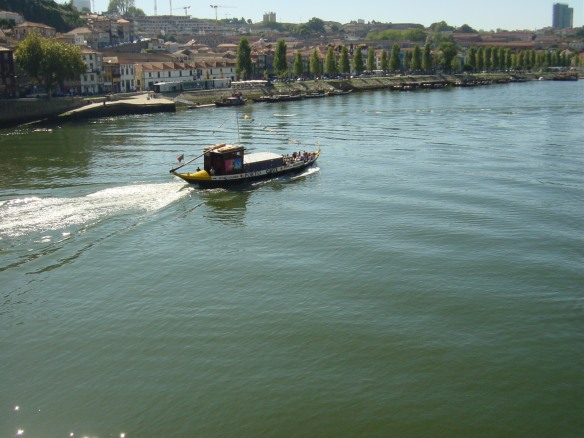 a rabela boat on the Douro River

on the riverfront of Vila Nova de Gaia

For those who are Port novices (like me before the trip!), I thought a basic primer on Port would be helpful.  Port is made from indigenous grapes, primarily Touriga Nacional, Tourgia Franca, Tinta Roriz (tempranillo in Spain), Tinta Barroca and Tinta Cão.  Traditionally, the grape varieties used in Port were field blends (whatever combination of grape varieties that occurred in the source vineyard).  Today, the grapes types are segregated by block planting.  Port is fortified; that means that during fermentation, when about half of the sugar has turned to alcohol, Aguardente (a brandy made specifically for the Port producers), is added to stop the fermentation.  This raises the alcohol level to between 19-21%, and leaves a good deal of residual sugar in the Port.  The Port is then transferred to stainless steel or large wooden tanks or casks to age for a minimum of two years.  An overview of what happens next, and the various Ports, are described below.  During our trip, we drank each of these different types of Port.

Ruby Port is a blend of several vintages.  It is the lightest, simplest Port; typically wood aged 3-5 years.  This is the entry level Port, and meant to be consumed upon release.

Reserve Ruby Port is a blend of several vintages and wood aged 5-7 years, and because of the additional time spent in cask, has more complexity and structure than a Ruby Port.  Meant to be consumed upon release.

Late Bottled Vintage Port (LBV) is produced from grapes of a single harvest, and bottled between the 4th and 6th years after harvest.  Meant to be consumed upon release.

Crusted Port is a blend of two or more vintages; aged in wood for up to four years and then in bottle for up to another three years.  The year you see on the bottle is the year the Crusted Port was bottled.  Crusted Ports are unfiltered, and need to be decanted to remove the sediment (crust).  A Crusted Port can be aged 10-20 years.

Vintage Port is the so-called King of Ports.  A Port declaration occurs when the producer believes that the vintage is exceptional, and the declaration has been approved by the IVDP, Port’s governing body.  A Vintage Port is a blend of grapes from several Quintas that the producer owns or buys from.  A Vintage Port is wood aged for at least two years, and then bottled between the second and third year after harvest.  A Vintage Port will age for 30+ years.  Note that historically, a vintage was “declared” three times per decade.  However, that has not been the case since 2000, where the vintages of 2000, 2003, 2007, 2008, 2009 and 2011 were declared.  Further, not all producers“declare” the same vintage.  Also, one thing we learned on the trip is that Vintage Port should be decanted.

Tawny Port usually starts off like a Ruby Port, but spends an extended time in wood to soften and round its character.  The large oak casks (pipes) that are used to age these Ports are somewhat porous and as a result, oxidation occurs.  As the oxidation takes place, the color of the wine turns from purplish red to an amber or reddish brown.

White Port is a blend of indigenous white grapes that are fortified like other Ports; can be aged in tanks or wood.  Drank as an aperitif, or mixed with tonic and lemon.

Now for the visits and other highlights of our trip – 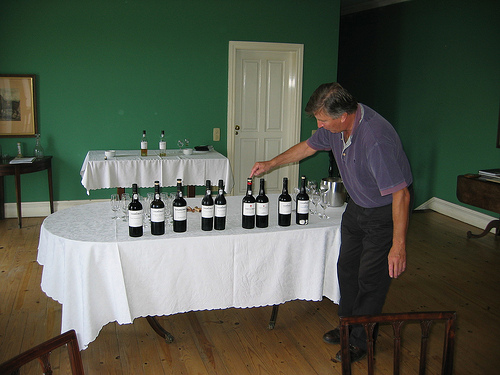 Johnny Graham with our Port tasting at Churchill’s

Dinner was followed by a wonderful tasting at Vinologia (http://www.vinologia.pt); stand out wine was the 1952 Dalva Golden White Port. 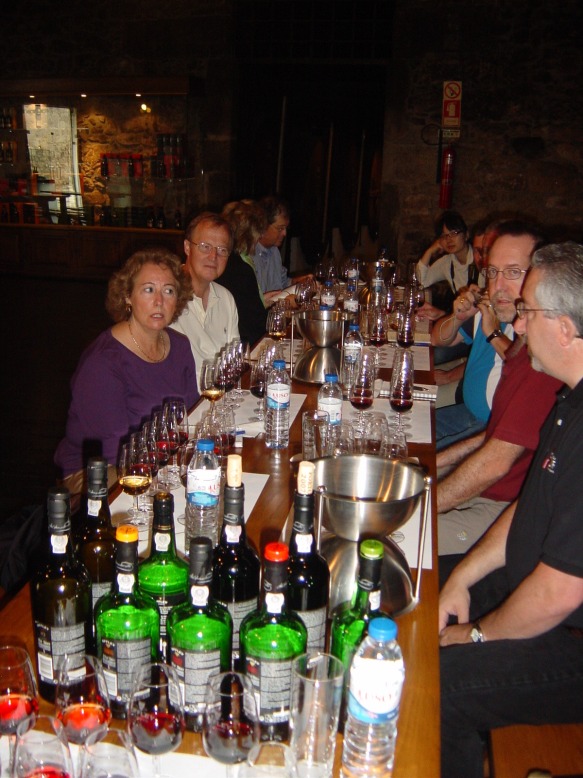 our tasting at Vinologia (not sure what Roy said to get this look from me!)

Cellar Master’s Board at the Dow/Warre’s lodge

Porto Vasconcellos  – visit and tasting with Jorge; nothing special about this visit (in fact, the only visit on the trip that was poor).

Day 3 in Vila Nova de Gaia and then a drive to the Vinho Verde wine region:

Charlie at our tasting at Offley

Sogrape Vinhos, and our visit and tasting was primarily with Luis Sotomayor, head of Sogrape’s winemaking team (or, as he said, the “chief winetaster”).  Our visit included a really fun blending competition, with each of us blending our own 10 Years Old Tawny Port; stand out wine was the 30 Years Old Tawny Port.  A really great visit! 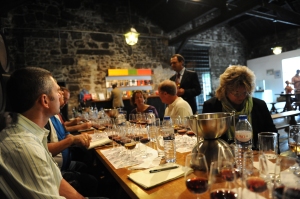 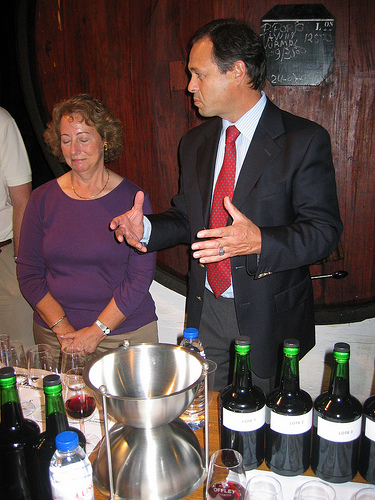 me with Luis Sotomayor at Offley

Quinta de Aveleda in Vinho Verde (http://www.aveledaportugal.pt/index.php?id=77) –Aveleda is owned by the Guedes family, and our visit and tasting was with António Guedes, director of viticulture, and also António Mendoza, commercial director.  This is a beautiful estate; and the wines that I enjoyed were the Aveleda Vinho Verde 2008 and Casal Garcia Vinho Verde Rosé 2008.  Another really nice visit. 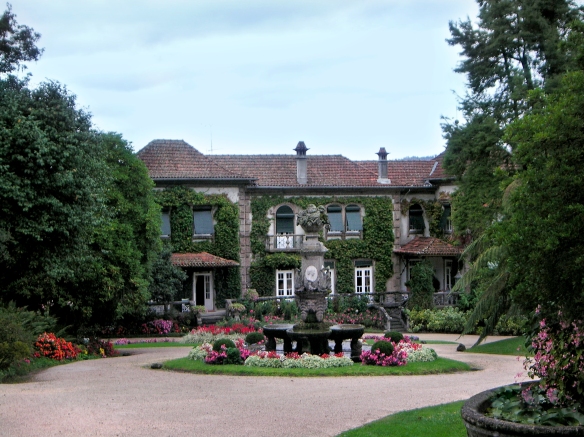 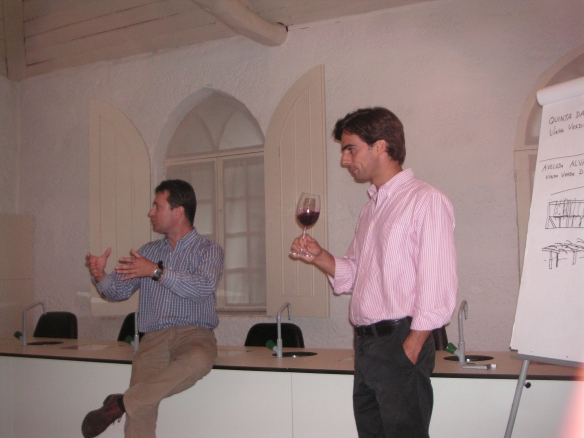 in the beautiful gardens of Quinta de Aveleda

Dinner was at Artemísia in Porto, where we enjoyed some really nice wines with our meal, including the Quinta Vale D. Maria 2001 (a Douro red).

Day 4 in the Douro Valley – 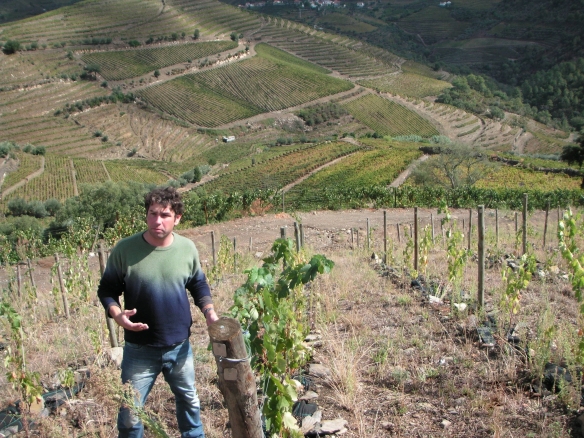 winemaker Miles Edlmann in the vineyards of Quinta da Cavadinha 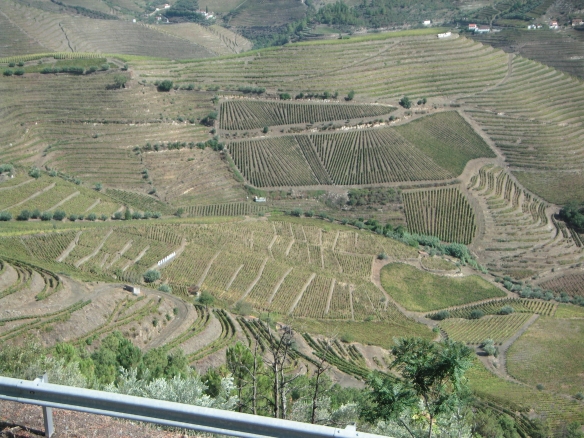 Dow’s Quinta do Bomfim (http://www.symington.com/vineyards/symington-familys-vineyards#viewGallery/0) – visit, lunch and tasting with winemaker João Pedro Ramalho (Miles Edlmann and Dan Carbon also joined us for lunch).  Stand out wines were the Altano Douro Red 2007, 1987 Quinta do Bomfim and 1996 Quinta do Bomfim.  Another fantastic visit!

lunch at Quinta do Bomfim 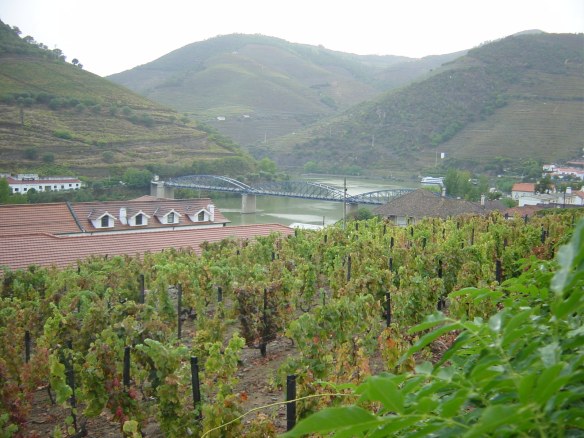 view from Quinta do Bomfim 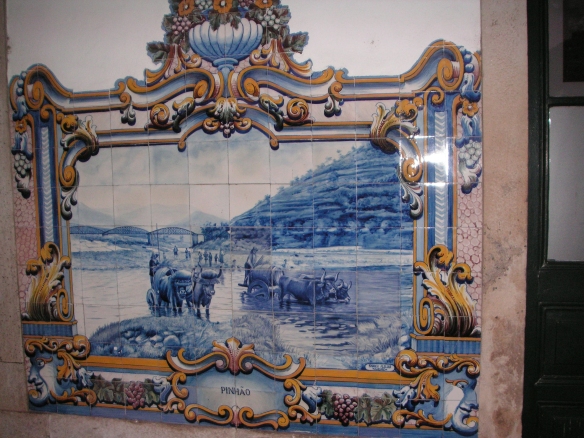 at the train station at Pinhao

Day 5 in the Douro Valley – 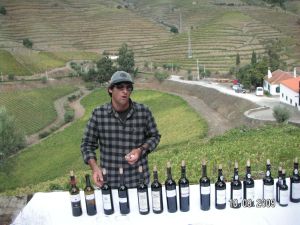 Tomas Roquette at Quinta do Crasto

Quinta do Crasto (http://www.quintadocrasto.pt/)  – owned by the Roquette family (Jorge and Leonor Roquette, and sons Miguel and Tómas) we spent the entire day at Quinta do Crasto, including walking the vineyards, tastings of tables wines and ports, lunch and dinner with the Roquette family, drinks by the poolside and a boat ride (on Miguel’s boat) on the Douro River.  Stand out wines were the Crasto 2007 (a Douro red), Crasto 2008 (a Douro white), Reserva Old Vines 2004 and 2007, Vinha da Ponte 2007, Vinha Maria Teresa 2006, Touriga Nacional 2001 and 2003, Tinta Roriz 1997 and 2000 Vintage Port.  A truly fantastic day!

Tomas Roquette, Andy (from our group), Jorge Roquette and Miguel Roquette at Quinta do Crasto 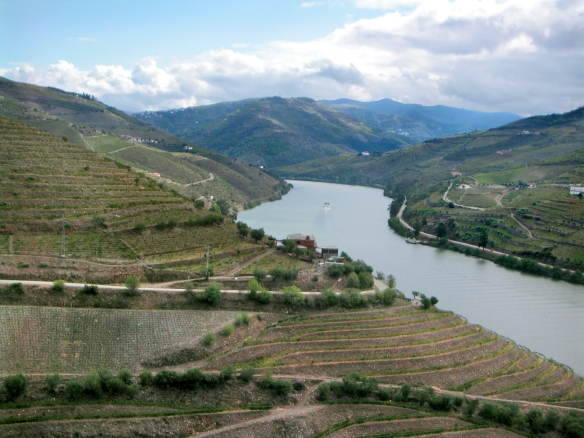 the view from Quinta do Crasto

aperitifs served poolside at Quinta do Crasto (Andy, Charlie and me) 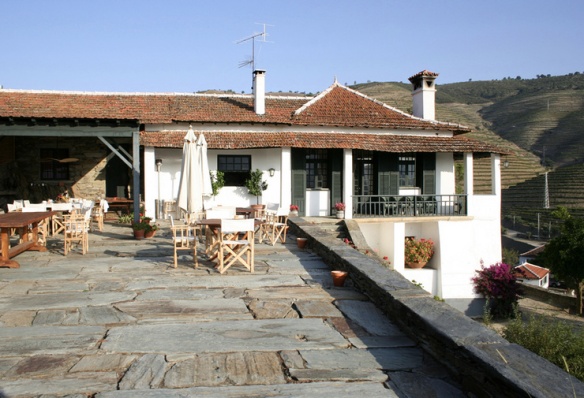 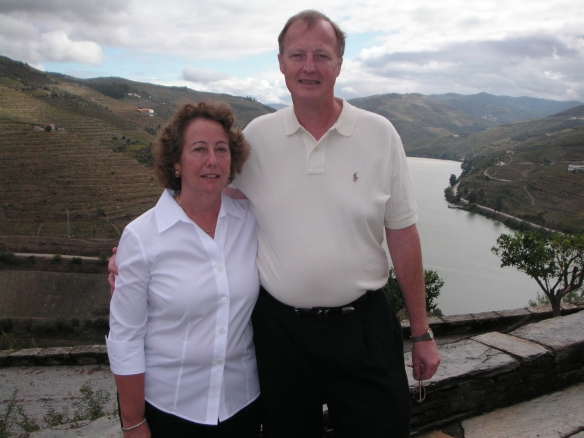 Charlie and me at Quinta do Crasto

Charlie and me on the Douro River 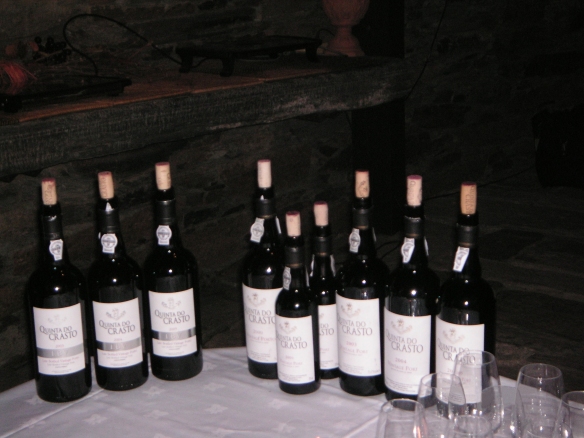 our Port tasting at Quinta do Crasto

Day 6 in the Douro Valley –

Quinta da Romaneira (http://www.quintadaromaneira.pt/en/) – visit, tasting and lunch at Redondo (at the time, Quinta da Romaneira had a beautiful hotel and restaurant) with Joel Fonseca Tibéro (an enolgist, who was the sales director).  The lunch with wine pairings was great!  My favorite wines were the Rosé 2008 and Verdelho 2007.  This was a really nice visit.  As a footnote, I stayed in touch with Joel Tibéro after our visit, and Joel helped me with visits in other countries.

Mario, me and Charlie at Quinta de Romaniera 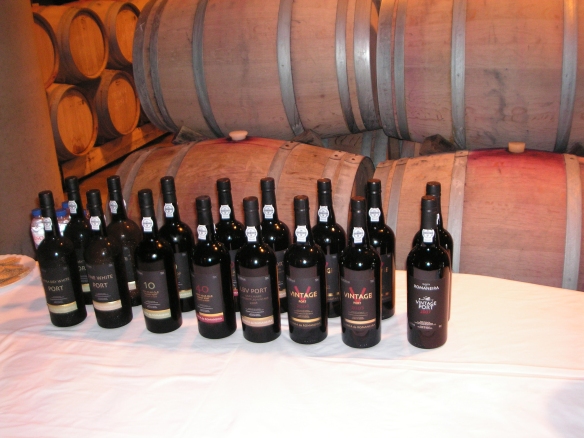 Joel Tibéro at our Port tasting at Quinta da Romaneira 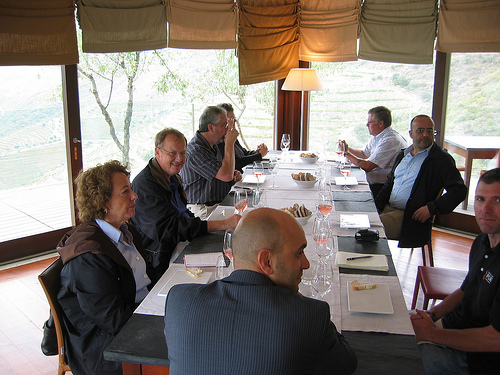 our unch at Redondo at Quinta da Romaneira 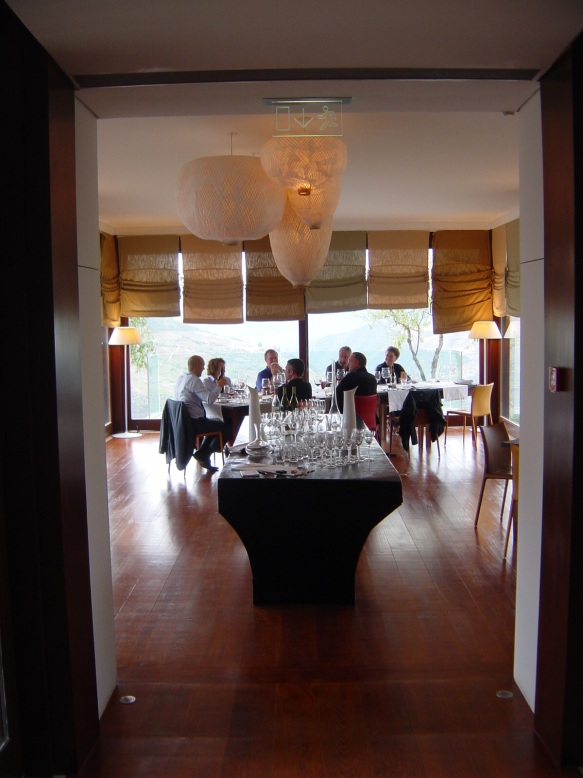 lunch and tasting at Redondo restaurant at Quinta da Romaneira 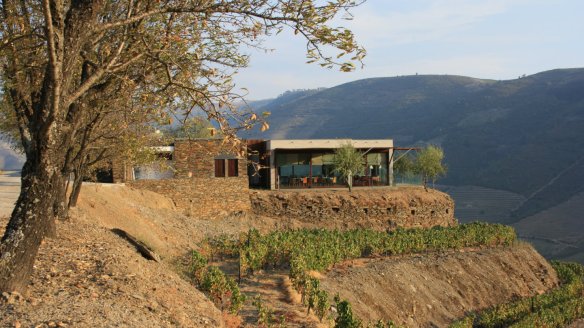 Charlie and me at Quinta da Romaneira

Quinta de Nápoles (Niepoort) (http://www.niepoort-vinhos.com/en/process/) – visit and tasting of cask samples with winemaker Luis Seabra.  Luis later joined us for dinner, and he brought many bottles of table wines and Port.  Luis is a charming and knowledgeable winemaker. 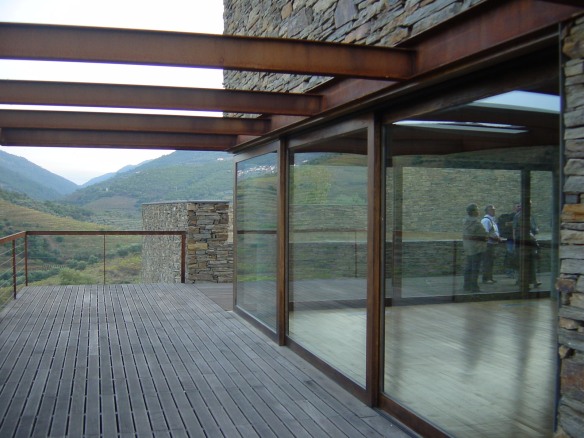 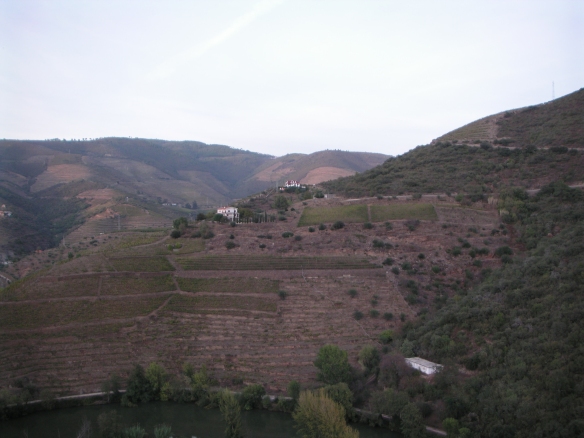 Dinner at Restaurante DOC in Folgosa (http://www.docrestaurante.pt/); a wonderful dinner.  Stand out wines were the Niepoort 30 Years Old Tawny Port and Niepoort 1959 Colheita. 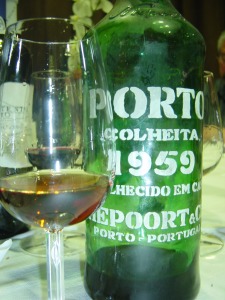 Port brought by Luis Seabra to dinner at DOC 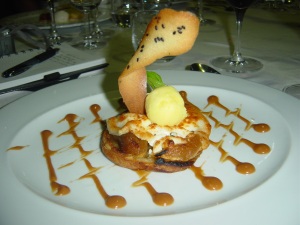 one of our dishes at DOC

Day 7 in the Douro Valley – 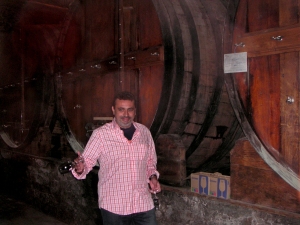 Miguel Braga in the cellars of Quinta do Mourão 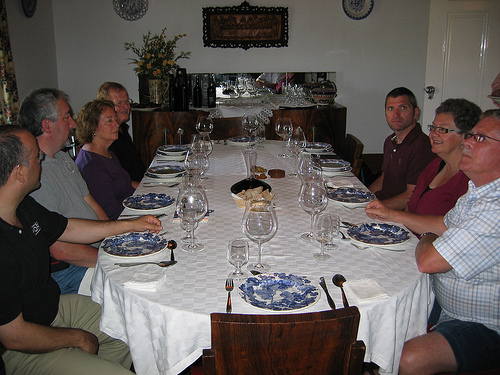 lunch at Quinta do Mourão

A few last comments.  We flew into Porto the day before the tour started with For the Love of Port, and had dinner that night at Foz Velha.  This was a really enjoyable meal.  Finally, we had a very early flight out of Porto the next day after the tour concluded, and we met our driver outside our hotel at around 5:00 a.m.  When we stepped outside of the hotel, we were amazed to see hundreds, if not a thousand, people in the streets around our hotel.  Our driver told us that these were people still up and partying from the night before; something that happened every Saturday night in Porto!